What is it about being in the middle years that makes me incredibly nostalgic? Is it because I am in my middle years reflecting on my childhood while also pondering on the years that lie ahead? Is it because I am now the age I remember my mother being during my own childhood- as if she is forever preserved at the ages 37-40 and I at the ages 7-10? Just the other day, my mother explained how witnessing your own child’s early life is like the blink of an eye. Now in her early 70s, she says that time seems to rapidly speed up. Using my 13 year old niece as an example, we recalled when my sister brought her home as an infant from the hospital as if it were yesterday. Similarly, I can fondly remember my own childhood and how the events of 30+ years ago seemed to be only last week. Nevertheless, I look back on the first decade of my life and am bewildered at what a very different world it was then from today. Perhaps it was the innocence of my childhood not yet corrupted by angst of teenage and early adult years, or by the sorrow from the loss of important and beloved figures in my life now gone, or by the knowledge of upsetting and hateful news all over the world constantly in my face thanks to the technology of the internet.

Being so far away from the people from my early life may intensify the nostalgia. Would I feel so achingly nostalgic and long for the ordinary moments of my childhood if I still could visit and stay in my childhood home from the early 1980s? If I could be with my parents and sisters at any time? My mother frequently assuages my aches for the past with pictures of the family Christmas tree or by sharing the beautiful family moments from the present. Pictures of family gatherings at my sister’s home with her children enjoying the same childhood moments we once did. Pictures from Christmas of the present and as new memories are made.

Embracing my childhood memories and the people who shaped them brings new meaning to my present life and what lies ahead. So before such loving memories become even more remote in time and recollections, I will honor on paper such meaningful moments from holiday seasons in my past.

A cherished and much loved possession from my very early childhood is Billy Bear- my trustworthy loyal teddy bear companion from Christmas 1978 and onwards through so many journeys in my life. For a few holiday seasons from 1981- 1983, my mother would take my sister and me to a local Minneapolis department or toy store in late November or early December to help pick out four or five similar potbellied teddy bears to my Billy Bear. How excited I was the first time bringing home more companions for Billy Bear! This would mean more birthday party teas and celebrations for my beloved stuffed animals with cookies, and gifted toys from the basement wrapped in recycled wrapping paper. When we brought the bears home though, they were neatly placed on a shelf in my or my sister’s bedrooms. My mother gently helped me understand that these new potbellied bears would only be with us for a few days. I could carefully hold and love them in the interim time but soon we would take them to a place where they would then be given to other little boys and girls who would love them. In a subtle way, she helped me to comprehend on a basic level that not all children in the world or even our city were as fortunate to have a home or so many toys. Loving those bears for a few days took on a new meaning and the annual ritual of picking out the bears and then bringing them to the people who would then pass them on to their new owners became a favorite part of the holiday season for me. 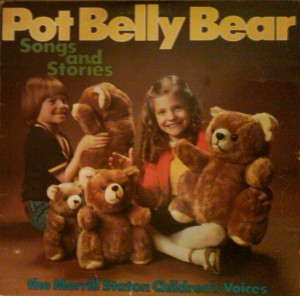 The Pot Belly Bears we would love and pass onto other children each year. And yes- I did have this record!

In addition to the loving ritual of bestowing potbellied teddy bears to other children in the community, there were preparations of gifts for family and loved ones, which took on a creative spin. There were many varieties of cookies to be made (so many kinds and names I can’t recall at this point), cut out and decorated with green and red sugar, silver and gold balls, and dyed frosting. Most gifts for my parents or grandparents were usually creations from school art class such as glazed clay bowls or Billy Bears, plastic beaded shrinky dink ornaments, or intricate drawings. A home art project one year included our own homemade wrapping paper- plain, dull white newsprint decorated with Christmas tree or star imprints from homemade carved out stamps on potatoes and inked on with gold, red and green acrylic paint. The freshly printed wrapping paper would dry for a couple of days in the basement until we could wrap boxes of cookies or school art projects to send to my grandparents or cousins in other states.

Memories from holiday seasons from my childhood also include recollections of preparations for festivities and pageants at school. Classmates and teachers would share family and cultural customs from Hanukkah and Christmas such as the spinning of the dreidel and lighting of the menorah, or the tradition of searching for an almond in Swedish Christmas rice pudding. Rehearsals in music class were held in the school theater for the holiday pageant which included traditional and contemporary Christmas and Hanukkah songs and a shortened version of the Nutcrackers’ Suite. My mother stitched together a bright red yarn wig for me to come to life as a Raggedy Anne doll in a rendition of Dance of the Sugarplum Fairies. Even to this day, I get excited when hearing just a few notes from Tchaikovsky’s famous ballet and I can still imagine myself moving robotically in the limelight across the stage with classmates as we performed to our parents, grandparents and siblings in the audience.

One Christmas Eve in 1981 (or was it 1982?), my mom and grandparents summoned my sister and me down to the basement. For the past day, there had been some secretive commotion and my sister and I patiently waited for the secret to be revealed. We were told to quietly step down the stairs and as we descended, there curled up and shivering on a blanket in the corner was a forlorn, lonely little mutt which had been rescued from the Humane Society. My sister named him Sam after Samuel Clemens (Mark Twain). On that first night, he whimpered, cried and would hardly touch any food other than the odd Cheerio from my grandma’s palm. Sam stayed part of our family until my last year of college in 1996 and has become a blended part of the happy memories of my childhood. On that first Christmas though, he finally ventured upstairs that morning, sheepishly making his way into the heart of our family as we sat around the Christmas tree in our living room. That particular Christmas morning, a beautiful and quiet snow blanketed the neighborhood with icicles slowly forming on the outside trees. Someday I may be a very old woman, but no doubt if I were to hear Bing Crosby’s White Christmas, that magical Christmas morning with my mom, grandparents, sister and Sam will come to my mind. 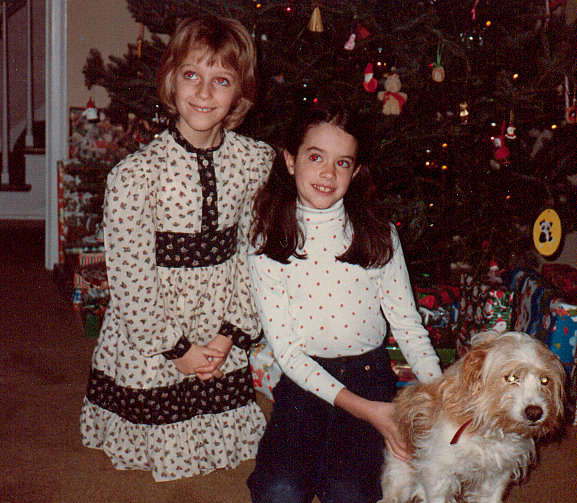 The memorable Christmas Sam joined our family. Circa 1982

Reflecting on those early childhood memories of holiday seasons, I realize what made the memories precious were not the material gifts nor even the lure of what Santa would bring. Rather, they were sharing and being part of the kinship of family, friends and community. Although such nostalgic moments cannot be repeated, I realize their essence has followed me through life, even when I have been far away from the beloved family of my early childhood. New and different memories have been created as I celebrated Christmas and the holiday seasons with my father’s extended family in 1993, or with my family in Germany in 1995, or with my ersatz family in China from 2010-2013 and finally with my adopted Kiwi family in New Zealand these past two years. As my life evolves into new chapters and changes, I will no doubt strive to model the Christmases and holiday seasons of my future after the values and memories of those Christmases and holiday seasons from my past.