It finally seems like the warm weather is here to stay for a while in Nanjing. This will mean that I am finally dressed appropriately according to Chinese standards. This doesn’t mean that I was dressed crudely or provocatively before. Rather I am now wearing the same number of layers as my Chinese neighbors and brethren.

During the months of March and April, the temperature fluctuates often. Some days it gets as warm as 85 degrees F or 27 degrees C while other days it can be much cooler as if winter isn’t quite ready to let go and allow spring to have its moment of glory. During those isolated and infrequent freak hot days, it’s not uncommon to see Westerners including myself dressed casually in shorts and t-shirts. I recall my childhood in Minneapolis, Minnesota, a place where one has to endure endless months of cold, dark and depressing days with dirty piles of snow on the sides of city streets and lonely pieces of brown grass trying to poke through. Mother Nature always blesses Minnesotans with the first warm day of the year in late April. On such a day, even if it isn’t more than 60 degrees F/ 15 degrees C, people rejoice and come alive again as they become reacquainted with the green outside world they haven’t seen in six months. Pasty, pale legs poking out of mothball covered shorts suddenly become the fashion statement du jour. The tight, plastic insulation covering the windows of homes gets ripped off. A distant game of Frisbee is heard in a nearby park and a dog barks gaily as its master throws it a tennis ball to retrieve. People don’t care that it isn’t the real summer. They just need a fix because they know that Mother Nature may change her mind and dump a foot of snow on them two days later. To not enjoy, relish and take in that gift of a warm day would be a sin and a waste.

The Chinese have a different take on the changing of seasons and weather. Unlike the scantily clad foreigners in Nanjing, many locals can still be seen wearing several thick layers on an unusually warm, spring day. Motorbikes are fitted with thick, padded mitts over the handlebars. Men and women of all walks of life are seen wearing heavy black, wool coats covering their arms and neck. I count the layers I see on passers-by, sometimes as many as five, and this at high-noon as the sun harshly pokes through the ozone. Walking down the street wearing a short sleeve shirt and shorts, I get strange looks at my pale legs.

I’ve tried to make sense of this and also question why I get looked at as if I am an alien when I dress lightly on a hot, spring day. At the vegetable market, the well-meaning motherly venders I have befriended sneer at the thin, white linen shirt I am wearing. While one of the vendors pinches the fabric on my sleeve and chastises me, a small group soon gathers around me and joins in on the playful chiding. They do not approve of my attire and likely worry that I will get sick and catch the flu. Don’t I realize that it could get cold later in the day? I sheepishly try to defend myself and keep stammering “It’s hot today! It’s 30 degrees!” I try to turn the table on one of them. She is dressed in three layers. “Aren’t you hot?” Confidently, she replies, “Oh, I’m quite comfortable and feel ok.”

I have now learned that my Chinese neighbors take a practical approach to spring attire. While I may scratch my head and wonder how they can wear so many layers on a hot day, they see it as being prepared for the inevitable drop of temperature that may follow on such a day. There is an old adage here which is “Chun wu qiu dong” or “Spring comes slowly uncover, fall comes slowly cover”. This saying expresses the belief that it’s not wise to completely change to summer wardrobe until the summer is definitely here to stay. In the fall, the opposite is true and one should slowly start to cover oneself in layers as the weather changes from hot summer temperatures and fluctuates its way eventually to winter. According to traditional Chinese medicine practices, the body needs to slowly get used to the fluctuating temperatures. Whereas the temperatures in winter and summer are relatively stable, the outside temperature constantly varies in spring and fall and your own body temperature may be thrown off by constant changes in the outside temperature.

The last of spring rain for the year?

Now that this has been explained to me, it makes sense. I can appreciate much more the well-meaning email reminders and text messages from students and Chinese coworkers that encourage me to consider the severe weather conditions and prepare Chinese herbal medicine to protect myself from the harsh conditions.

In the last week, I have finally witnessed around me people finally shedding their layers. There is no longer the fear that winter will pull spring back under its wing and there is a confidence that summer now is a greater, approaching force. Older people wear one light coat and slacks. Young, leggy women are donning their miniskirts and high heels and walk under the shade of their umbrellas to protect themselves from the sun. Guys are out on the basketball court in their favorite NBA jerseys and shorts. Babies are waddling around again in their split pants exposing their little bums to the outside air. I smile and take in the rebirth of the outside world around me. Ahhhh.. Summer is just around the corner. 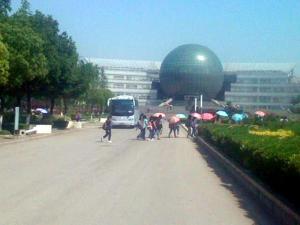 Students still are wearing a couple of layers on a hot day. But a telltale sign that summer is almost here in the eyes of the Chinese is when you see umbrellas being used as sun cover.